Tissue Engineering is “an interdisciplinary field that incorporates and applies the principles of engineering and life sciences toward the development of biological substitutes that restore, maintain, or improve tissue organ or function” (R. Langer, Science,
260:920-926, 1993)

It can also be explained as “the development and manipulation of laboratory grown molecules, cells, tissues, or organs to replace or support the function of defective or injured body parts” (Pittsburgh Tissue Engineering Initiative)

Why we needed Tissue Engineering, Why other Fields were not Good enough?

Alternatives to Tissue Engineering are

Drawbacks of using Inert Biomaterials & Auto/Allografting  are Failure, Foreign body reaction & one of the most important thing is that it Does not grow/remodel into a desired Shape, Disease transmission, Immune response, Harvest site morbidity. 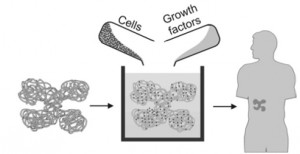 Imagine patients with peripheral arterial disease who do not have to face the prospect of amputation because they can receive a vascular graft created from their own cells. Or imagine children undergoing heart surgery who do not have to face a lifetime of operations or the risks from synthetic heart valves because they can receive a valve made from their own cells, which can grow with them. These scenarios may sound like science fiction, but they are becoming increasingly realistic options for treatment thanks to tissue engineering.

Every day healthcare professionals are faced with the devastating and expensive implications of the loss or failure of an organ or a tissue. Treatments include organ transplantation or the use of mechanical devices, all of which have well documented problems. Huge advances were made in the 20th century that allow the reconstitution of damaged and lost tissue through organ and tissue transplantation. But need for organs and availability of donors are acutely disparate.

In 2006 in the United States alone about 125?000 patients were on waiting lists for an organ transplant because of end stage organ failure, but only 27?000 transplants were performed, and more than 7000 people died while waiting. This provides the driving force for the evolution of surgery, the ultimate aim of which is to be able to engineer tissues and to induce their regeneration.

Tissue engineering, according to one of its pioneers, Joseph Vacanti, director of the Tissue Engineering and Organ Fabrication Laboratory at Massachusetts General Hospital in Boston, involves “combining engineering and the life sciences to produce living replacement structures including tissues and organs to help patients.” It has the potential to revolutionise the treatment of numerous chronic and disabling conditions in the 21st century. Research groups around the world are working towards the creation of functional tissue in almost every body system. It is exciting that tissue engineering could provide the answer for medical conditions for which we currently have no long term treatments—for example, heart failure and spinal injuries.

The concept of engineering tissues is simple. A scaffold must be built on which the tissue can grow. The cells would need to be isolated from the relevant tissue and expanded in culture and then “seeded” on to the scaffold. Finally the cells and the scaffold must be provided with growth factors so that they generate into the desired functional tissue (fig 1). This can take place inside the body on surgical implantation (in vivo) or outside of the body in specifically designed bioreactors (in vitro; fig 2).

Fig 2 A six chamber heart valve bioreactor developed at the Institute of Medical and Biological Engineering, University of Leeds

Cells in tissue engineering can be autologous (the patient’s own cells) or allogeneic (a donor’s cells). Ideally cells would be obtained from an autologous source because this would limit rejection, but availability is limited. Allogeneic cells, although readily available, would require immunosuppressive treatment or genetic engineering to permit immune acceptance. The emergence of stem cell technology is having a big effect on tissue engineering because stem cells can be made to differentiate into appropriate cell types, and the use of adult mesenchymal stem cells is the current research buzz area. The critical problem that remains is to ensure that stem cells permanently stay as the desired cell type and to minimise the risk of malignancy because cells fail to stop growing.

The next component is the development of a scaffold, which provides a three dimensional structure that ideally mimics the tissue being replaced in architecture and function. Scaffolds are usually designed to gradually degrade and be replaced with new tissue and cells from the patient so that over time it becomes their own tissue. So called smart biomaterials are able to talk to cells by giving appropriate signals that improve how these cells interact with scaffolds and are vital to create different types of tissue.

Growing tissue in the laboratory requires closely mimicking the environment in which cells naturally proliferate. This is best achieved in bioreactors, complex machines that closely simulate the inside of the body with the pH, temperature, and concentration of nutrients and even the forces that cells would be exposed to. Such an approach has been shown to lead to improved formation of tissue for heart valves, blood vessels, cartilage, and bladders.

Worldwide attempts have been made to engineer almost every human tissue. According to Vacanti, more than 30 body tissues have been investigated in his laboratories alone, which Robert Langer, from the Massachusetts Institute of Technology, thinks have “the potential to treat everything from burns to paralysis.”

Cardiovascular—From re-creating the blood vessel to the creation of engineered heart valves and patches of cardiac muscle, exciting possibilities for the management of cardiovascular conditions lie ahead. Engineered blood vessels and vascular patches have been successfully implanted into the pulmonary system of paediatric patients, with encouraging midterm results.Robert Nerem, from the Georgia Tech Center for the Engineering of Living Tissues, says that engineered arterial blood vessels are “10 years from Food and Drug Administration [FDA] approval, whereas heart valves remain more than a decade away.”

Musculoskeletal—The clinical need for musculoskeletal tissue is diverse. Attempts to engineer bone, cartilage, meniscus, tendons, and ligaments, which regenerate poorly in the body, could provide relief for patients with arthritis, osteosarcoma, and trauma.

Skin—Skin was the first engineered organ to be approved by the FDA. Commercial products, including Dermagraft (Smith and Nephew) and Appligraf (Organogenesis), have been used in the clinical treatment of patients with burns and severe chronic pressure sores and ulcers secondary to diabetes or other chronic illnesses.

Nervous system—Peripheral nerve injuries are a common and important cause of disability. Nervous tissue is notoriously difficult to generate, but engineered nerve grafts are being investigated. An extension of this would be in spinal cord regeneration, in which engineered nerve grafts combined with cell and gene therapy may be an answer for people left debilitated after spinal injury.

Breast—Tissue engineering has the potential to redefine rehabilitation for patients with breast cancer by creating a sufficient volume of viable fat tissue using the patient’s own cells. This could overcome the problems associated with implants and the risks associated with using autologous flaps of tissue.

Gastrointestine—Attempts have been made to implant engineered small intestine and stomach, albeit in animal models, which would have a widespread impact in the management of surgical resection after malignancy or other conditions. Steps have also been taken to engineer hepatic tissue, and this would be one step closer to alleviating the shortage of donated livers.

Genitourinary—In April 2006 successful long term transplants of engineered bladders in paediatric cases, led by Anthony Atala of the Institute of Regenerative Medicine at Wake Forest University School of Medicine, made front page news and here claimed to be a “breakthrough” for organ transplantation. Engineered kidneys, urethra, vaginal, and penile tissue are being investigated.

Strict regulation of any emerging biotechnology is required to protect patients. The US FDA has the initial framework to regulate engineered products. However, in Europe no uniform regulatory approach exists, and in the United Kingdom, the Medicines and Healthcare Products Regulatory Agency needs to achieve a consensus on whether tissue engineered products constitute drugs or devices before any products can be approved for market.

An ethical debate exists over whether tissue engineering is a morally innocent technology because it mimics nature or whether morally dangerous because it defies nature. Further ethical considerations include the questions of ownership, donation, and consent when using allogeneic materials, especially in relation to commercial products.

The public and political sensitivity about the use of embryonic stem cells may be a restricting factor in the progression of certain products, although there is no such problem with adult stem cells. Also, the use of xenogeneic engineered products may raise questions about what it means to be human, leading to religious objections. As controversial is the use of animal experimentation in developing engineered tissue in large animal studies before human clinical trials.

Tissue engineering was hyped in the early 1990s and has underdelivered in terms of available commercial products. Although enormous potential exists, numerous regulatory, ethical, and commercial challenges must be overcome. According to Robert Nerem “the chief challenge is determining the cell source that will allow for off the shelf availability of products and strategies for clinicians.”

David Williams, director of the UK Centre for Tissue Engineering, says that it is important to consider the “real costs of autologous tissue engineering.” It “is likely to be extremely expensive” to operate on a patient; send the acquired tissue to a laboratory, where it is processed to derive and manipulate the required cells; and to grow the construct in a bioreactor before sending it back to the doctor to implant it in the patient.

The initial drive for such technology was the lack of donors for transplantation, but experts cannot reach a consensus about when whole organ transplantation will occur. “We can’t say what the timeline will be. There is no way to know yet since there is much work remaining,” says Vacanti. The reality is that progress in whole organ regeneration has been slow, and there are a number of scientific reasons for this.

Firstly, isolating and culturing the multiple cell types that form a whole organ is an immense hurdle, and the critical matter of sustaining a blood supply to a cultured whole organ is unresolved. The use of smart membranes may overcome the problems of delivering nutrients to engineered organs and promote rapid growth.Mathematical modelling is seen to be pivotal in translating tissue engineering from the laboratory to clinical practice because it will help researchers better understand the myriad dynamic interactions in tissue regeneration.

We thank John Fisher and Sotorossis Korrosis, from the Institute of Medical and Biological Engineering, University of Leeds, for permission for the use of the image of the heart valve bioreactor. I also thank Joseph Vacanti, Robert Langer, Robert Nerem, and David Williams for their comments.