Scientists have created ultra-thin electronic devices that can “melt away” in the body once their job is done.

A new study, published in the journal Science, details how scientists have created a tiny, fully functional electronic device capable of vanishing within their environment, like in the body or in water, once they are no longer needed or useful. There are already implants that dispense drugs or provide electrical stimulation but they do not dissolve.

The latest creation is an early step in a technology that may benefit not only medicine, like enabling the development of medical implants that don’t need to be surgically removed or the risk of long-term side effects, but also electronic waste disposal.

Researchers led by John Rogers, a materials scientist at the University of Illinois at Urbana-Champaign, Fiorenzo Omenetto, a biomedical engineer at Tufts University in Medford, Massachusetts, and Youggang Huang of Northwestern University have already designed an imaging system that monitors tissue from inside a mouse, a thermal patch that prevents infection after a surgical site is stitched up, solar cells as well as strain and temperature sensors. 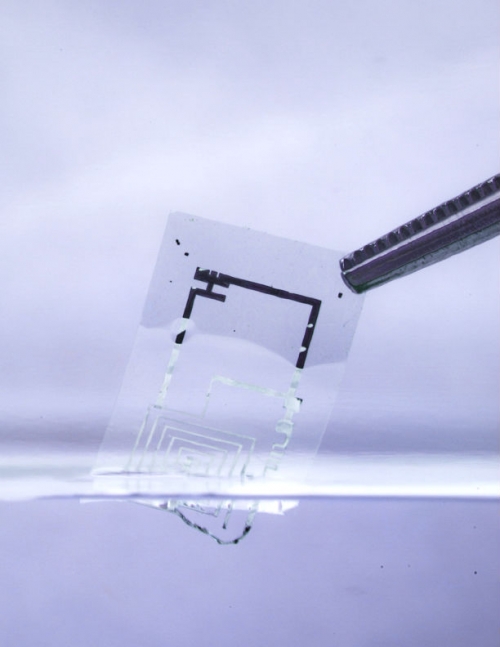 “We refer to this type of technology as transient electronics,” Rogers, a professor of engineering at the University of Illinois, said in a statement. “From the earliest days of the electronics industry, a key design goal has been to build devices that last forever — with completely stable performance. But if you think about the opposite possibility — devices that are engineered to physically disappear in a controlled and programmed manner — then other, completely different kinds of application opportunities open up.”

The researchers, who have already developed “electronic tattoos,” sensors that bend and stretch with the skin, say that they can now make just about any kind of dissolving high-performance electronic or optical device using transient electronics, according to Nature News.

In the latest experiment, researchers had created tiny computer chip-like devices that were designed to generate heat to kill germs and fight infection after surgery. They found that the devices worked in mice for more than a week until their silk coating dissolved enough for bodily fluids to break down key parts of the device. They found that after three weeks, the tiny gadgets had completely vanished.

The latest technology could also be used to develop cell phones and other common gadgets that dissolve after a number of years rather than ending up in landfills, according to researchers.

“These electronics are there when you need them, and after they’ve served their purpose they disappear. This is a completely new concept,” Huang said.