Hospital rooms beep and flash with many devices that are increasingly getting infected with malware (see “Computer Viruses Are ‘Rampant’ on Medical Devices in Hospitals”). But for several reasons, these gadgets are often incompatible with commercial security software.

Now, new technology developed by academic researchers could catch most malware on the devices just by noting subtle changes in their power consumption. This could give hospitals a quick way to spot equipment with dangerous vulnerabilities and take the machines offline. The technology could also apply to computer workstations used in industrial control settings such as power plants.

This is a preview of Electrical Detection of Medical Malware. Read the full post (612 words, 2 images, estimated 2:27 mins reading time)

A new “smart catheter” that senses the start of an infection, and automatically releases an anti-bacterial substance, is being developed to combat the problem of catheter-related blood and urinary tract infections, scientists reported in Baltimore on August 23 at the 244th National Meeting & Exposition of the American Chemical Society.

Dipankar Koley, Ph.D., who delivered the report, said the “smart catheter” technology is being developed for both catheters inserted into blood vessels and the urinary tract.

“About 1.5 million healthcare-associated infections are reported in the United States alone each year, resulting in 99,000 deaths and up to $45 billion in extra health care costs,” said Koley.

This is a preview of Smart Catheter to Prevent infections. Read the full post (474 words, 3 images, estimated 1:54 mins reading time)

University of Michigan researchers have cataloged more than 100 such technologies in a new wiki of medical devices designed for resource-limited settings. The Global Health Medical Device Compendium, an open-source inventory, is hosted by the popular appropriate technology wiki Appropedia. It is expected to serve as an important communication vehicle for end users, non-governmental organizations, researchers and others to help advance such technologies.

This is a preview of Wiki for Medical Devices Launched. Read the full post (946 words, 6 images, estimated 3:47 mins reading time)

This is very exciting news just out of the University of Michigan‘s Electrical Engineering and Computer Science Department (EECS).  They report that Dr. Euisik Yoon (Prof. EECS and Biomedical Sensors and Subsystem’s Thrust Leader) and his staff have developed the BioBolt – a “non-invasive brain implant” to create motion from thought.  That is, by placement near the brain on the cranium, the device can pick up neural signals and transmit them.

This is a preview of BioBolt: A new Biomedical Innovation for Rehablitation. Read the full post (397 words, 2 images, estimated 1:35 mins reading time)

Researchers at MIT and Northeastern have come up with a new system for monitoring biomedical indicators — such as levels of sodium or glucose in the blood — that could someday lead to implantable devices that would allow, for example, people with diabetes to check their blood sugar just by glancing at an area of skin. A number of researchers have developed microparticle-based systems — hollow, microscopic particles filled with specific chemicals — for monitoring biomedical conditions or for the selective delivery of drugs to certain organs or areas of the body. But one drawback of these systems is that the particles are small enough to be swept away from the initial site over time. The new system involves a different kind of microparticle that can avoid this problem. While traditional particles are spherical, the new particles are shaped like long tubes. The tubes’ narrow width, which is comparable to that of the previously studied microparticles, keeps the tubes’ contents in close proximity to blood or body tissue, making it easy for the particles to sense and respond to chemical or other conditions in their surroundings. The tubes’ relatively greater length keeps the tubes very well anchored in place for long-term monitoring, perhaps for months on end. The particles eventually could be used to monitor the glucose levels of diabetics or the salt levels of those with a condition that can cause swings in blood salt concentrations.

This is a preview of Micro-worms used for Continuos monitoring in Healthcare:A Revolution. Read the full post (968 words, 2 images, estimated 3:52 mins reading time) 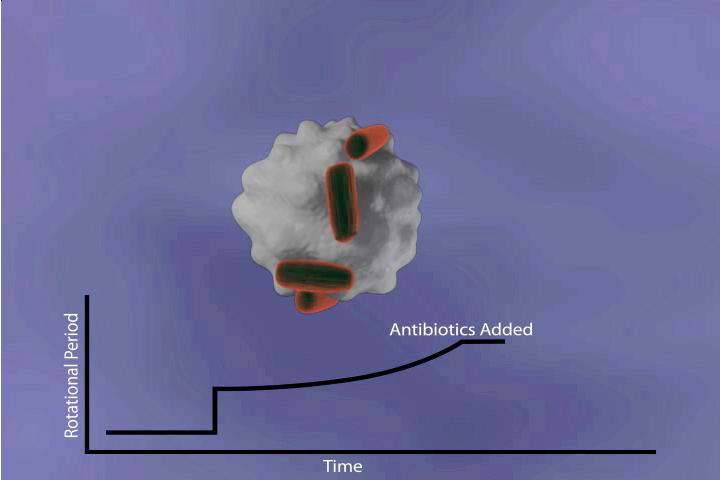 With an invention that can be made from some of the same parts used in CD players, University of Michigan researchers have developed a way to measure the growth and drug susceptibility of individual bacterial cells without the use of a microscope.

The new biosensor promises to speed treatment of bacterial infections, said Raoul Kopelman, who is the Richard Smalley Distinguished University Professor of Chemistry, Physics and Applied Physics and a professor of biomedical engineering, biophysics and chemical biology.