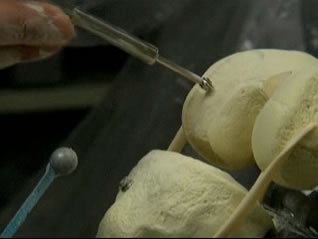 Biomedical engineers developed a robotic arm to very precisely resurface the knee before replacing it. In order to do this, a 3-D image of the knee is generated, providing a live-action view of the knee during surgery. A stereo camera system constantly updates surgeons on the location of the diseased portion of the knee–this keeps the healthy parts untouched. Visual alarms and artificial resistance tell the surgeons when they are too close to healthy parts. After the resurfacing is done, the implant is placed.
Virtual realityMore than 15 million Americans have osteoarthritis in their knees, and about 600,000 of them could be helped by a partial knee replacement. A new way to fix arthritic knees that uses robots and computers is helping patients walk out of the hospital the same day of surgery.Once an avid runner, Harvey Saff was surprised when he was sidelined with knee osteoarthritis.”It felt like a knife going right through me,” said Saff. “That’s the only description that can aptly describe it.”

This is a preview of Robotics Helps in curing Knee with Arthiritis. Read the full post (625 words, 2 images, estimated 2:30 mins reading time) A virtual-reality technology invented in Canada could improve how health workers assess people suffering from brain injuries and brain diseases.

The KINARM combines a chair with robotic arms and a virtual-reality system that allows researchers to guide patients through tasks, such as hitting balls with virtual paddles.

Once the tests are done, the system gives a detailed report on how the patient differed from normal.

The system has several advantages over traditional testing methods, such as touching one’s finger or nose, said Prof. Stephen Scott of the Centre for Neuroscience Studies at Queen’s University in Kingston, Ont.

“No. 1 is that it is objective,” Scott said Monday from San Diego, where he is the presenting the research at the Society for Neuroscience Conference.

Currently, clinicians often assess patients with brain injuries and disease using crude, subjective scoring systems that range from zero to two, based on whether the patient can touch a nose or another object.

But those systems offer few choices, which makes to difficult to identify problems and show improvements after therapy, Scott said.

This is a preview of “KINARM” A VIRTUAL REALITY ARM. Read the full post (233 words, 1 image, estimated 56 secs reading time)