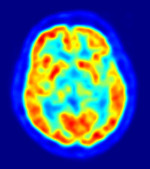 Researchers say a PET imaging agent is able to detect a biomarker for Alzheimer’s disease, in a new study hailed as a “landmark” in the fight against the debilitating disease.

In the study, the amount of beta-amyloid deposits in the brains of the living on a PET scan matched up with what was discovered later during an autopsy.
“It’s a landmark paper, because it’s the first time that, apart from presentations of these data at meetings, …a tracer like that has been validated systematically against neuropathology,” Dr. Karl Herholz, a neurologist with the University of Manchester and president of SNM’s Brain Imaging Council, told DOTmed News. “It’s not a big surprise it’s that good, but it’s certainly important to document that.”

The study, sharing preliminary results from a phase 3 multicenter trial, appears Tuesday in the Journal of the American Medical Association.

For Alzheimer’s disease, a definitive diagnosis is made on patients with progressive dementia who during autopsies are found to have beta-amyloid deposits and neurofibrillary tangles in their brain, the researchers said.

But as the “true” diagnosis can only be delivered postmortem, it means with the living, the diagnosis of Alzheimer’s isn’t always accurate.

“Diagnostic accuracy on clinical grounds is on the order of 80-90 percent if done carefully. If it’s not done carefully, accuracy may even be lower,” Herholz said.

Doctors also might miss or misdiagnose the disease in one-third of patients with mild symptoms, said the researchers, led by Dr. Christopher M. Clark with Philadelphia-based Avid Radiopharmaceuticals.

The imaging agent, called florbetapir F-18 and developed by Avid, binds to beta-amyloid deposits, and fires out gamma rays, which can be picked up by PET scanners.

In the study, the researchers gave brain scans to a group of older patients at hospices or long-term care facilities an average of 99 days before they died.

They then compared the results of the scans, interpreted by three nuclear medicine specialists, with pathological analysis of the brains after autopsy.

The researchers found the imaging and autopsy results agreed for the presence or absence of major plaque deposits for 96 percent of the 29 individuals. Of the 15 patients who met the pathological criteria for Alzheimer’s disease, the scans detected significant deposits in 14 of them, the researchers said.

Using the scans, the researchers also said there were no plaque deposits in the 74 younger people (ages 18 to 50) they used as a control.