Watch any TV medical drama and you’ll see a defibrillator in action. During tense moments, defibrillators bring patients back from the brink of death with a dramatic shock. But what you don’t see on TV is the cell membrane, muscle, and skin damage that a defibrillator’s shock can cause. Even implanted defibrillators are painful to patients and damaging to tissue. But gentler devices may be on the way. A research team led by Stefan Luther of the Max Planck Institute and Flavio Fenton of Cornell University has found a new approach that greatly reduces the intensity of defibrillating shocks. 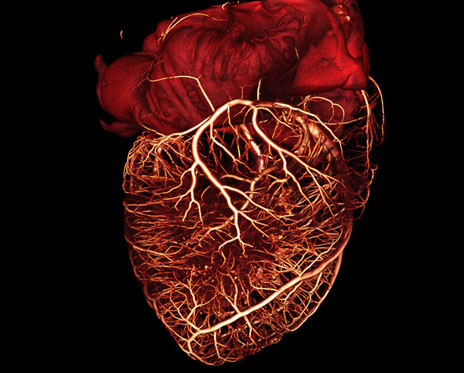 A defibrillator delivers a dose of electrical energy to the heart to fix rapid, irregular, and uncoordinated contractions, which are potentially fatal. This dose resets the difference in voltage between the interior and exterior of the cells in the muscle—a process known as depolarization. A standard defibrillation device uses a single high-energy shock to accomplish this feat, which stops any arrhythmia and reestablishes normal rhythm. “No one knows exactly why, but it requires a voltage gradient of about 5 volts per centimeter to terminate electrical turbulence in the heart, which can require up to 350 joules if delivered as one shock,” says Fenton.

Instead of using one big shock, Luther and Fenton’s team delivered a series of five electric-field pulses of less than a joule each to fibrillating dog hearts. The result, described this week in Nature, was an 84 percent reduction in the average amount of energy versus standard defibrillation.

Robert Gilmour Jr., one of the physiologists on the research team and associate dean for research and graduate education at Cornell, says it has been known since the 1970s that placing an electrode directly on an area of heart tissue can stop fibrillation in that region, but that doesn’t do much good for fibrillation in the rest of the heart. Installing electrodes all over the heart might bring the entire muscle back to a normal rhythm, but “such an approach would not be feasible clinically; you can’t make a pincushion out of the heart,” he says.

Instead, he explains, the new approach uses specially crafted electric fields to create “virtual electrodes” at tissue discontinuities—such as where the muscle meets a blood vessel or fatty tissue. These virtual electrodes are created with only two physical electrodes—one in the heart and one in a pacemaker-like device—a similar setup to that of an implanted defibrillator.

“This setup could make implanted defibrillators safer and more practical,” says Luther. He says today’s implants are associated with pain and potential health problems. “If at-risk patients could instead use implantable devices that carry almost no pain, this would mean an enormous increase in quality of life for many patients,” says Fenton.

If the low-energy pulses work in humans, “patients might not even notice the shocks; they would be below the threshold for pain,” says Luther. Milder pulses could be the basis for longer-lasting implanted devices, because they would use less battery power over time, says Fenton. Surgery costs would decrease, as would the risk to patients. He adds that there’s no reason external defibrillators couldn’t also use low-energy pulses.

Since 1999, Philips Healthcare has had an external defibrillator on the market that delivers only 150 J, compared with 350 J delivered by some external defibrillators. “Philips is already in line with the thinking in this research,” says Sital Shrestha, product support engineer for the company’s HeartStart defibrillators. “But we have yet to see any evidence that higher or lower energy shocks would improve outcomes. Our next-generation device will also work at 150 J.”

Ward Hamilton, senior vice president of Zoll Medical Corp., says the company’s conventional defibrillators deliver a maximum of 200 J. “You always want to use a therapeutic dose of any medicine—the lowest levels of energy that effectively defibrillate the heart are going to make the safest, most attractive technology,” Hamilton says.

Fenton and Luther, in devising their method, called low-energy antifibrillation pacing (LEAP), uncovered some new but fundamental insights into how electric fields work in the heart. The two scientists, who are trained as physicists, say one of their most important outcomes was showing how nonlinear dynamics can be used to quantify and ultimately predict the effects of defibrillating shocks. For example, they were able to predict how long a shock should take to depolarize cells in the heart’s tissue based on differences in the heart tissues’ electrical conductances.

These kinds of insights aren’t easy to come by. “The heart’s three-dimensional structure and spatiotemporal dynamics is bewildering in its complexity,” says Luther.

For more on how the heart works, check out “The Virtual Heart,” where Fenton and his colleagues maintain a collection of interactive guides.