Researchers at Oregon State University have tapped into the extraordinary power of carbon “nanotubes” to increase the speed of biological sensors, a technology that might one day allow a doctor to routinely perform lab tests in minutes, speeding diagnosis and treatment while reducing costs.

The new findings have almost tripled the speed of prototype nano-biosensors, and should find applications not only in medicine but in toxicology, environmental monitoring, new drug development and other fields.

The research was just reported in Lab on a Chip, a professional journal. More refinements are necessary before the systems are ready for commercial production, scientists say, but they hold great potential.

“With these types of sensors, it should be possible to do many medical lab tests in minutes, allowing the doctor to make a diagnosis during a single office visit,” said Ethan Minot, an OSU assistant professor of physics. “Many existing tests take days, cost quite a bit and require trained laboratory technicians.

“This approach should accomplish the same thing with a hand-held sensor, and might cut the cost of an existing $50 lab test to about $1,” he said.

The key to the new technology, the researchers say, is the unusual capability of carbon nanotubes. An outgrowth of nanotechnology, which deals with extraordinarily small particles near the molecular level, these nanotubes are long, hollow structures that have unique mechanical, optical and electronic properties, and are finding many applications.

In this case, carbon nanotubes can be used to detect a protein on the surface of a sensor. The nanotubes change their electrical resistance when a protein lands on them, and the extent of this change can be measured to determine the presence of a particular protein – such as serum and ductal protein biomarkers that may be indicators of breast cancer.

The newest advance was the creation of a way to keep proteins from sticking to other surfaces, like fluid sticking to the wall of a pipe. By finding a way to essentially “grease the pipe,” OSU researchers were able to speed the sensing process by 2.5 times.

Further work is needed to improve the selective binding of proteins, the scientists said, before it is ready to develop into commercial biosensors.

“Electronic detection of blood-borne biomarker proteins offers the exciting possibility of point-of-care medical diagnostics,” the researchers wrote in their study. “Ideally such electronic biosensor devices would be low-cost and would quantify multiple biomarkers within a few minutes.” 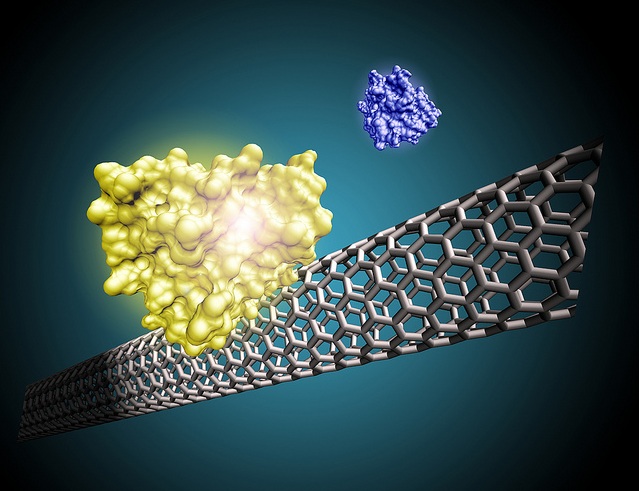 This work was a collaboration of researchers in the OSU Department of Physics, Department of Chemistry, and the University of California at Santa Barbara. A co-author was Vincent Remcho, professor and interim dean of the OSU College of Science, and a national expert in new biosensing technology.

The research was supported by the U.S. Army Research Laboratory through the Oregon Nanoscience and Microtechnologies Institute.