Regulatory Affairs is one of the major departments in a company which plays a crucial role in getting the developed product released into the market. This varies from country to country and market to market. For example, the standards and regulations are different for different country like the FDA for USA, CE Marking for the European Union etc. So, when a particular product is getting developed itself it has to be done in accordance to these Standards and Regulations so that it can surpass these testing standards and get released into the market. On the other hand, when a product developed in one country according to their standards, needs to be exported or sold in a different country then the same product need to be tested and certified according to the target market/country’s standards. Thus the entire process of Regulations are simplified and made feasible typically by the Regulatory professionals.

In the earlier decades the Regulatory Affairs Specialists were involved only in the final stage after the complete development of device but in the current times the Regulatory professionals play an extremely crucial role throughout the lifecycle of the product from the conceptualization to the post-market surveillance. 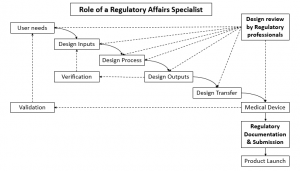 Thus, the Regulatory professionals secure the reputation of the Manufacturer by sustaining the provision of completely quality complaint products.

Given the increase in concerns and complexities about the products, new standards and regulations keep emerging at a very fast and frequent pace. Hence there exists a lot of scope for Regulatory professionals amongst the Medical Device and Pharmaceutical Industries.