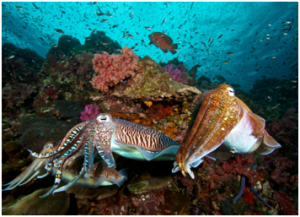 Cuttlefish: A master of disguise.

Cuttlefish is one of the most mystifying creatures of the deep which has abilities and even senses that are alien to us humans. This versatile animal can change its appearance at will, mimicking floating vegetation or rocks on the seafloor. Yet when danger looms, the animal can jet away at great speeds, shooting out a smoke screen of ink or using its ink to create decoys of itself. How does the cuttlefish accomplish all this? The parts explained below help this master of deception in disguising itself. 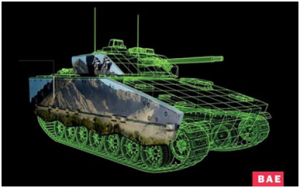 Pictorial representation of an ‘e-camouflaged’ tank.

Armoured vehicles use a similar technology known as “e-camouflage” which deploys a form of electronic ink to render a vehicle invisible. If you want people to see through you, then why not just film what’s behind you and project it onto your body? Using a set of electronic sensors attached to the tank’s exterior, the system would process the vehicle’s surroundings and recreate the colors, lines, and shapes common in its environment to project them on the tank’s hull enabling it to merge into the landscape and evade attack. Unlike conventional forms of camouflage wherein the vehicles have a particularly coloured camouflage (e.g. desert sand colour, grass colour etc), e-camouflage projects images on the hull that change in concert with the changing environment always insuring that the vehicle remains disguised. The tank is coated in silicon, effectively turning the vehicle into a highly reflective movie screen. Video cameras positioned on the tank take real-time footage of the surrounding environment, and projectors show the images on the surface of the tank.

This technique is short-lived due to some drawbacks. Cameras or projectors may fail, and the tank may be visible from different angles. Also it cannot be obscured from infrared, night vision and thermal sensors which can detect military vehicles with ease. BAE Systems’ ADAPTIV infrared stealth system provides a solution to that problem with a high-tech camouflage that mimics its surroundings so the vehicle blends into its background. 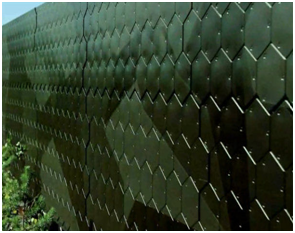 Thermo-electric pixels on the tank’s surface.

A system of more than 1000 5.5-inch hexagonal tiles made of thermo-electric material gives the tank its chameleon-like capability, which can confuse an adversary into thinking he is looking at something it is not. The tiles or pixels can rapidly change their temperature individually directed by thermal cameras that monitor and quickly project adjustments onto them to conform with the tank’s immediate environment. In its blending mode, it matches the temperature of its surroundings melding into the background to avoid detection.

Apart from the invisibility power another technology equips the tank with the ability to shapeshift to the eyes of infrared. Disguising vehicles with paint or netting is nothing new, but this technology does it in a far smarter way. It can transform the tank into an entirely different object drawing from its pattern library organized by terrain and projects itself as something native to the immediate area. For example, if it enters an Arctic environment it can conjure up a polar bear and project itself as one so sensors scanning for a tank see a harmless animal. 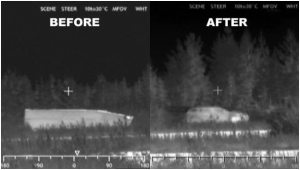 A tank camouflaging itself as a car.

It is so captivating to know how applied sciences and technology form a basis for each other to develop possible new solutions in different fields. On one hand a huge military tank is made invisible by a camouflaging technique inspired from a cuttlefish. On the other hand technological advancements in healthcare help in improving patients’ lives by the use of artificial organs, miniaturized wearable sensors, pacemakers etc. Indeed the science of today is the technology of tomorrow.