Sonography involves the use of a small transducer (probe) and ultrasound gel placed directly on the skin. High-frequency sound waves are transmitted from the probe through the gel into the body. The transducer collects the sounds that bounce back and a computer then uses those sound waves to create an image. Because ultrasound images are captured in real-time, they can show the structure and movement of the body’s internal organs, as well as blood flowing through blood vessels (Doppler Ultrasound). 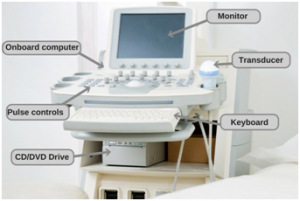 An Ultrasound Machine with the basic components labelled.

The ultrasound image is immediately visible on a video display screen that looks like a computer or television monitor. The image is created based on the amplitude (loudness), frequency (pitch) and time it takes for the ultrasound signal to return from the area within the patient that is being examined to the transducer. Ultrasound is an excellent modality for some areas of the body while other areas, especially air-filled lungs, are poorly suited for ultrasound. 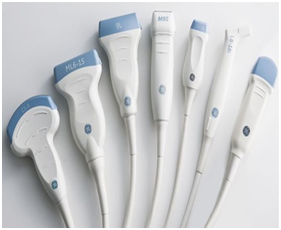 In some ultrasound studies, the transducer is attached to a probe and inserted into a natural opening in the body. These exams include:

The ultrasound machine can be operated in different modes based on the organ being imaged as well as its requirement for diagnostic purposes. The most common modes of ultrasound are: 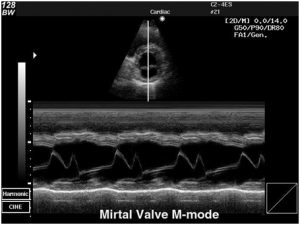 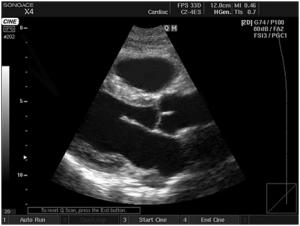 There are three types of Doppler ultrasound: 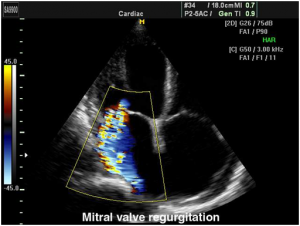 An example of Color Flow Imaging of a mitral regurgitation jet. The conventional colour codes are – BART: Blue Away, Red Towards, but can be changed.

Compared to other prominent methods of medical imaging, ultrasound has several advantages:

Drawbacks of ultrasonography include: