Virtual instrumentation is the use of customizable software and modular measurement hardware to design, test, measure and automate instruments virtually.

LabVIEW is a system design software with comprehensive tools needed to build any measurement or control application in dramatically less time and considered to be an ideal development environment for innovation, discovery, and accelerated results.

This is a preview of National Workshop on Virtual Instrumentation at Osmania University. Read the full post (192 words, 1 image, estimated 46 secs reading time) 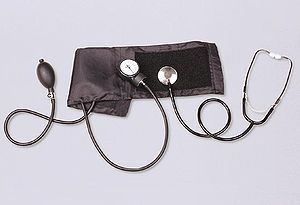 In around 5% of cases of high blood pressure is caused by kidney problems, but the causes of the other 95% of cases are unknown. There are a number of factors such as race, age, obesity, stress, smoking and lack of exercise that can contribute to the likelihood of a person developing high blood pressure but usually no one cause is directly responsible.

This is a preview of Why measure blood pressure?. Read the full post (514 words, 2 images, estimated 2:03 mins reading time)

Acoustic wave devices have been in commercial use for more than 60 years. The telecommunications industry is the largest consumer, accounting for ~3 billion acoustic wave filters annually, primarily in mobile cell phones and base stations.

These are typically surface acoustic wave (SAW) devices, and act as bandpass filters in both the radio frequency and intermediate frequency sections of the transceiver electronics. Several of the emerging applications for acoustic wave devices as sensors may eventually equal the demand of the telecommunications market.

Neuroscientists at the Mayo Clinic campus in Jacksonville, Fla., have demonstrated how brain waves can be used to type alphanumerical characters on a computer screen. By merely focusing on the “q” in a matrix of letters, for example, that “q” appears

Researchers say these findings, presented at the 2009 annual meeting of the American Epilepsy Society, represent concrete progress toward a mind-machine interface that may, one day, help people with a variety of disorders control devices, such as prosthetic arms and legs. These disorders include Lou Gehrig’s disease and spinal cord injuries, among many others.

This is a preview of Brain Waves Can 'Write' on a Computer in Early Tests, Researchers Show. Read the full post (684 words, 2 images, estimated 2:44 mins reading time)