There is no neat, targeted way to treat diabetic retinopathy, a condition that could lead to blindness. Laser therapy can result in diminished side and night vision and the other current method used, the cancer drug docetaxel, clear from the system so quickly that high doses are needed, increasing toxicity to healthy tissue. The research group ANPRON tells us about a team of Canadian scientists who think they have found a solution for sufferers of diabetic retinopathy. They have made a MEMS device (micron-sized electromechanical systems) that could be implanted behind the eye and release docetaxel on command by an external magnet.

This is a preview of BioMEMS Application-MEMS for Diabetic Retinopathy. Read the full post (248 words, 2 images, estimated 1:0 mins reading time)

People from BioMEMS research group @ University of auckland stated that

This is a preview of Innovation in BioMEMS-Apoptosis on Chips. Read the full post (156 words, 1 image, estimated 37 secs reading time)

Soon, drug delivery that precisely targets cancerous cells without exposing the healthy surrounding tissue to the medication’s toxic effects will no longer be an oncologist’s dream but a medical reality, thanks to the work of Professor Sylvain Martel, Director of the Nanorobotics Laboratory at Polytechnique Montréal.

Known for being the world’s first researcher to have guided a magnetic sphere through a living artery, Professor Martel is announcing a new breakthrough in the field of nanomedicine. Using a magnetic resonance imaging (MRI) system, his team successfully guided microcarriers loaded with a dose of anti-cancer drug through the bloodstream of a living rabbit, right up to a targeted area in the liver, where the drug was successfully administered. This is a medical first that will help improve chemoembolization, a current treatment for liver cancer.

Microcarriers on a mission

This is a preview of World First: Localized Delivery of an Anti-Cancer Drug by Remote-Controlled Microcarriers. Read the full post (349 words, 2 images, estimated 1:24 mins reading time)

The upside of chemotherapy is that it attacks cancer cells and kills them. The downside – and a steep downside it is – is that it is composed of highly toxic compounds that attack other cells of the body, too, resulting in any number of harmful side effects, from anemia to hair loss to nausea and vomiting.

The question concerning researchers is how do we deliver chemotherapy drugs to the harmful cells and leave the healthy cells alone? 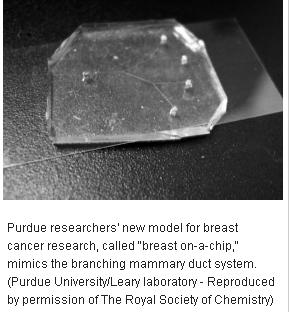 Purdue University researchers have reproduced portions of the female breast in a tiny slide-sized model dubbed “breast on-a-chip” that will be used to test nanomedical approaches for the detection and treatment of breast cancer.

The model mimics the branching mammary duct system, where most breast cancers begin, and will serve as an “engineered organ” to study the use of nanoparticles to detect and target tumor cells within the ducts.

This is a preview of “BREAST ON CHIP” IN PURDUE UNIVERSITY. Read the full post (376 words, 2 images, estimated 1:30 mins reading time)